With the support of
ISMEO
Incredible India!

In collaboration with
Istituzione Palazzo Rospigliosi 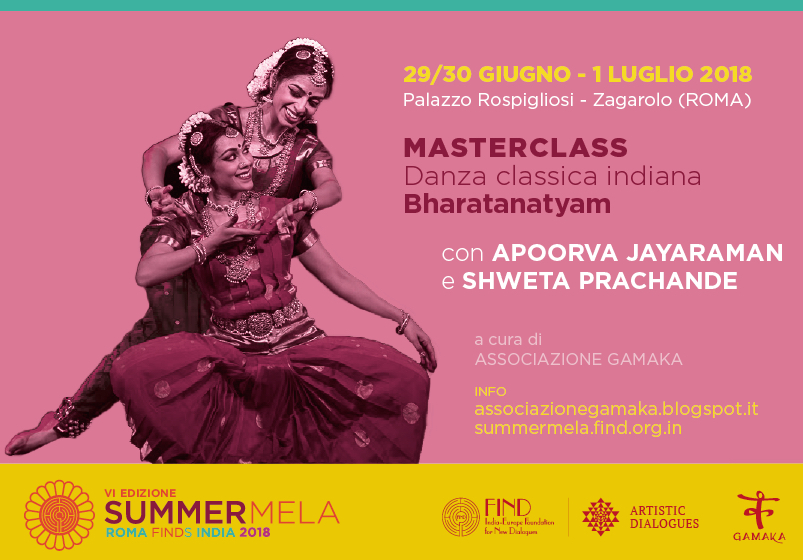 FIND Foundation in collaboration with Associazione Gamaka will organise a Masterclass in Indian Bharatanatyam Dance held by the dancers/choreographers Apoorva Jayaraman and Shweta Prachande. The masterclass will be held in the suggestive setting of Palazzo Rospigliosi a Zagarolo (RM). The Masterclass includes 3 days of intensive study and is aimed at both expert dancers and dance students. The programme will be based primarily on the study of the adavu technique and the Bharatanatyam dance repertoire and will also include a focus on the expressive technique (abhinaya) and the study of a work from the choreographic repertoire of Priyadarshini Govind.

On termination of the Masterclass, the participants  will present an Open Performance for the public in the prestigious setting of Palazzo Rospigliosi in Zagarolo (Saturday June 30 8.30pm).

Single Level: the programme includes 16 hrs of study over a three day period. For admission, candidates must have at least 2 years experience or fulltime study in Bharatanatyam Dance.

On application, participants will receive information regarding  accommodation  option  in  Zagarolo. Reservations can also be made with the Borgo dei Sagari [apartments from €30X60]. All reservations made via Associazione Gamaka are entitled to a reduced price [30 €]

The Masterclass will be limited to 20 participants. All applications must be received by the 24th.

June 2018. All candidates must complete the application form and pay the deposit applications will be processed on the order of receipt and on the enclosed curriculum. For information regarding application and enrolment, please contact Associazione Gamaka.

Apoorva Jayaraman has had the privilege of training under world renowned artist Smt Priyadarsini Govind for the past 16 years in Chennai (India). She was initially mentored in dance by Smt Padmini Ravi (Bangalore). She underwent specialized training in abhinaya from Padmabhushan Smt Kalanidhi Narayanan. She has featured as a prominent soloist in a series of international dance DVDs produced by Kalakriya that have gained worldwide popularity, earning her special recognition and acclaim among connoisseurs from around the globe. She has performed under the banner of several of Chennai’s most prestigious Sabhas, such as The Music Academy, Trinity Arts Festival, Narada Gana Sabha, Rasika Ranjani Sabha, Kartik Fine Arts, Yuva Utsav at Bharat Kalachar. She has toured USA, UK, Italy, and Germany, giving performances, workshops and lecture-demonstrations. She was awarded the Nritya Ratna – Best Dancer of the Year Award by Milapfest and the Arts Council UK (2014), the Vasanthalakshmi Narasimhachari Award by Narada Gana Sabha Chennai (2017) and Natya Ratna award by Trinity Arts Festival (2014). Her work has been featured in several leading international magazines and newspapers including the New York Times (USA), Physics World (UK), Pulse Magazine (UK), The Hindu (India), The Indian Express (India), Sruti Magazine (India), Aalaap Magazine (India) among others. She has explored her flair for choreography, and has created and performed in cross-style performances alongside Kathak and Odissi artists. She was invited by Natyarangam (Chennai) to be a part of commissioned choreographic works. She also presented, along with fellow artist Shweta Prachande, a duet production on Krishna Karnamrutham choreographed by them at the Natyarangam Thematic Festival. Apoorva is also an astrophysicist with a PhD in Astronomy from the University of Cambridge and a Masters degree in Physics from University of Oxford.

Shweta Prachande started learning Bharatanatyam from the age of 5 and is currently training from Guru Smt. Priyadarsini Govind after completing the five-year course at Kalavardhini Dance Institute under Guru Dr. Sucheta Chapekar. Having moved to Chennai in 2005 to pursue dance as a full time profession, Shweta has since come to be recognized as one of Bharatanatyam’s leading young dancers in today’s generation. Her dance is a concoction of crisp movements, fluidity of motion and energetic dynamism. Having learnt Kalaripayattu and completing a diploma in Contemporary Dance Studies from The Trinity Laban Conservatory of Music and Dance, London, the aesthetic amalgamation of these styles and techniques makes her dance unique and enthralling. Shweta is the assurance that Bharatanatyam is a timeless art. She is known for her impactful and energetic portrayal of nritta and presentations of abhinaya that is deep and mesmerizing. She has trained in Nattuvangam and Carnatic Music. She has also completed her Masters in Fine Arts in Bharatanatyam from the Bharathidasan University and her Masters in Commerce from The Pune University. Winner of many national scholarships, she has many awards to her credit and has won almost all major dance competitions across the country. She has performed extensively in India and abroad to critical acclaim and is a regular feature every year during the December Music and Dance Festival in Chennai. She has also been featured in a number of programs for many famous TV Channels like Doordarshan and Star Plus.